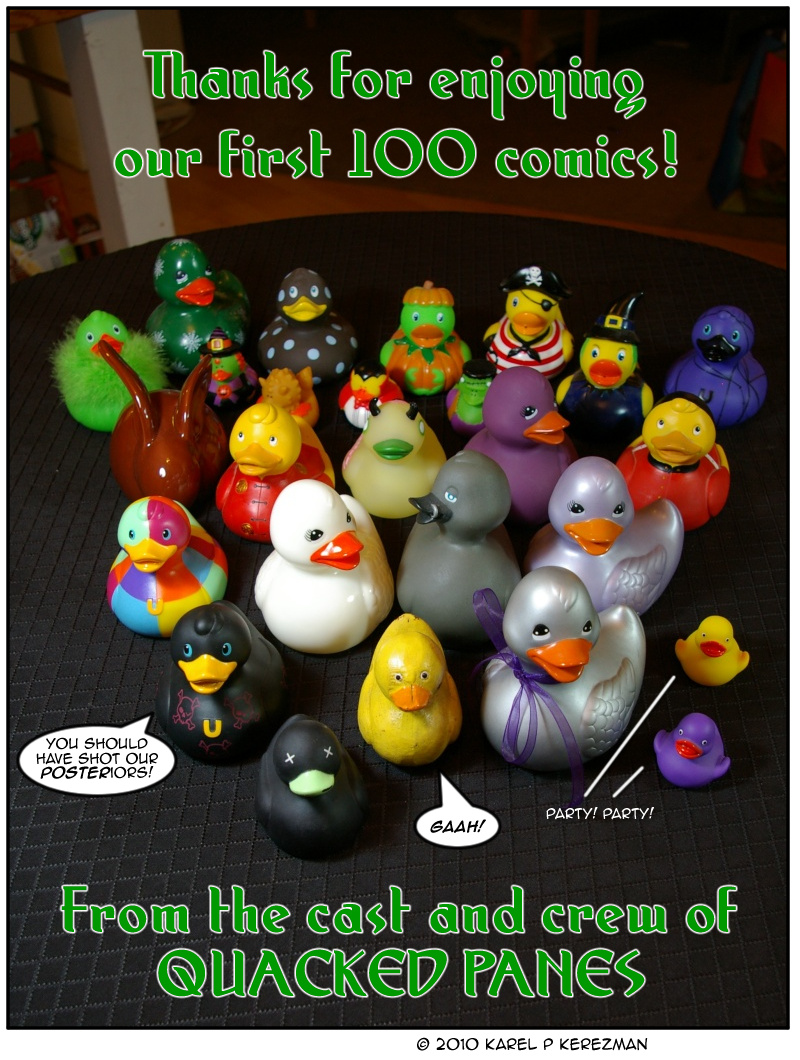 As you see, nothing fancy, just a thank you poster.

Because I wouldn’t have made it this far without the encouragement, kudos, and snarky comments from you folks. It’s one thing to have a silly idea to make a photographic webcomic about toy ducks, it’s something else entirely for dozens of people around the world to actually find amusement in the results.

Now, with that said…

…with that said, as I was saying, I am going to take the month of May off from posting. There is too much, let me sum up:

I’m absolutely not going away. I love doing this comic, and I’m a long way from running out of bad puns and silly pop-culture riffs. However, if I don’t take a little bit of time to recharge my batteries and rebuild a buffer (and maybe even spruce up the website a bit) I’ll end up either burning out or missing updates… or both.

So. Enjoy a quiet month of May. Tell a friend to take a stroll through the archives. Print out and pin up your favorite comic on your cubicle wall, perhaps.

And I’ll see you all bright and early on… May 31st, because I’m certainly not going to make you wait until June 7th for a new comic!

Oh, and I’ll say it yet again: THANK YOU.

Thank you! I’m going to enjoy the rest, fully. 🙂

Totally unrelated, but… am I the only one to think that the spotted duck in the back has a bad case of the duck equivalent of chicken pox?

And congrats, of course! Bet you never suspected there was such a market for fine duck-themed entertainment. 😉

I’ve been trying to figure out what to make of those spots, character-wise… that’s part of why it’s taken so long to work that one into the cast. Oh, the challenges I face! *grin*

Congrats on #100, my fine feathered friend!

(I’ve wanted to do a group shot of my flock, but I can’t afford to rent a ballroom…)