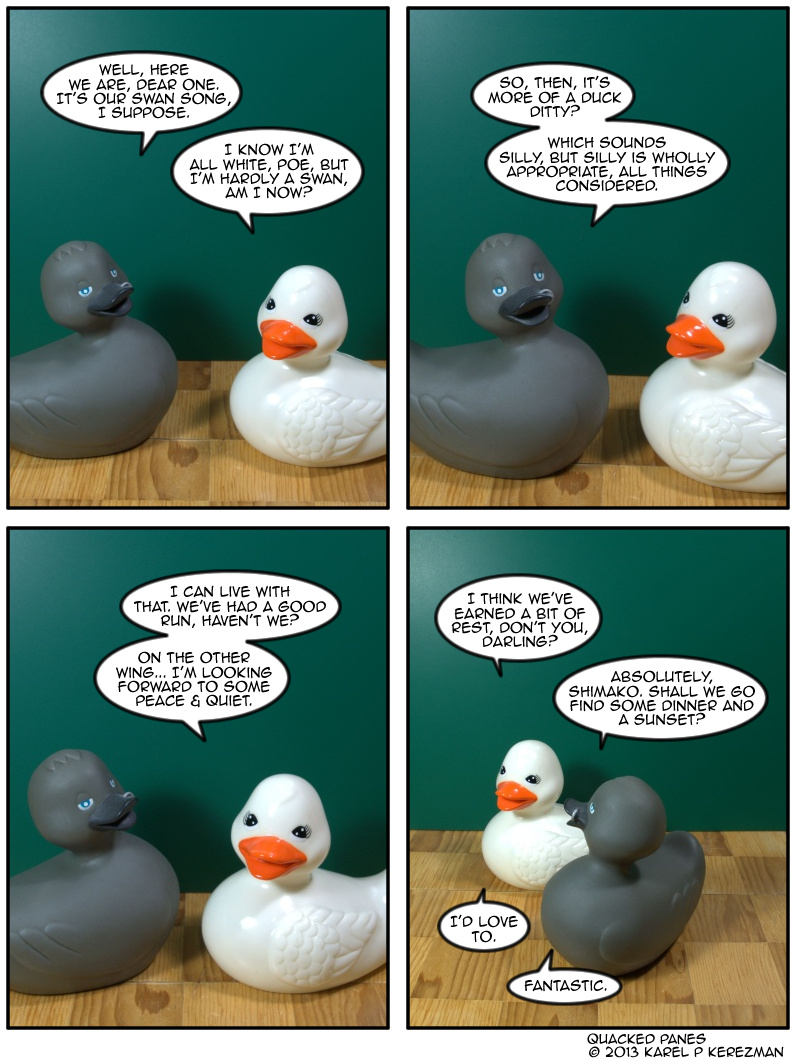 This wasn’t actually how I expected the last normal, main-line comic to end up. Problem is, I figured out what I wanted to do for the last few weeks and found myself here, with only the one comic left before all of that kicked off.

So here we are. It’s not over, but in a way it’s over. I still have [redacted] number of comics to make and post for the arguably-grand finale. I’ve work remaining here. There aren’t any more punchlines to worry about anymore, though, nor should I have to deal with getting that green background panel to behave itself. (The poor thing’s a bit warped and scuffed now. C’est la vie.) Is it a bit dusty in here, or is it just all the pollen in the air? I’m feeling a bit sniffly at any rate…

On a whimsical note (and if the word “whimsical” doesn’t describe my approach to this entire project I don’t know what else does) I’d like to point out that I did something with this comic that I don’t think I’ve done at any other point in the four-hundred-some-odd comics to come before. Can anyone spot what that is?

And I’ll see you on Monday for the kick-off of the arguably-grand finale.

Either this is the first time you’ve used “on the other wing,” or…

…you lost track of positioning in the last panel; it seems awkward to have had Shimako cross behind Poe as they move offscreen. Doesn’t seem like the sort of thing you’d normally do.

I thought I had seen “on the other wing” before. Maybe I’m wrong.

The perspective shifted in the last panel — the camera is higher, more angled. And the lighting seems a bit different, since the background is brighter… but maybe that’s just the result of the camera change.

You should probably tell us before we pick the whole thing apart. 😉

It’s just a silly thing, but: Up to now I’ve avoided using an individual comic’s title in the dialog of the comic itself.

Ah! I might have noticed that if I’d actually looked at the title on this one. :-}

I’m surprised no one beat me to it.